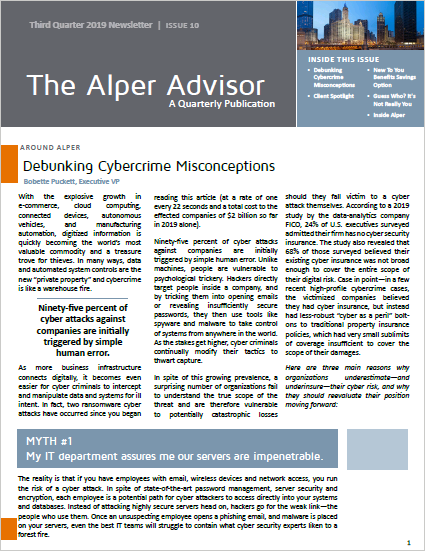 The third quarter issue of The Alper Advisor is live with a cover story where we debunk common cybercrime misconceptions we hear from Clients, our latest Client Spotlight, reveal a way for employers to save on benefits and more. Click on the Advisor to read more.

Click here to view the top benefits news stories for July. For questions about anything you read, contact our Employee Benefits Team at EBTeam@AlperServices.com.

With the explosive growth in e-commerce, cloud computing, connected devices, autonomous vehicles, and manufacturing automation, digitized information is quickly becoming the world’s most valuable commodity and a treasure trove for thieves. In many ways, data and automated system controls are the new “private property” and cybercrime is like a warehouse fire. As more business infrastructure connects digitally, it becomes even easier for cyber criminals to intercept and manipulate data and systems for ill intent. In fact, two ransomware cyber attacks have occurred since you began reading this article (at a rate of one every 22 seconds and a total cost to the effected companies of $2 billion so far in 2019 alone).

Ninety-five percent of cyber attacks against companies are initially triggered by simple human error. Unlike machines, people are vulnerable to psychological trickery. Hackers directly target people inside a company, and by tricking them into opening emails or revealing insufficiently secure passwords, they then use tools like spyware and malware to take control of systems from anywhere in the world. As the stakes get higher, cyber criminals continually modify their tactics to thwart capture.

In spite of this growing prevalence, a surprising number of organizations fail to understand the true scope of the threat and are therefore vulnerable to potentially catastrophic losses should they fall victim to a cyber attack themselves. According to a 2019 study by the data-analytics company FICO, 24% of U.S. executives surveyed admitted their firm has no cyber security insurance. The study also revealed that 68% of those surveyed believed their existing cyber insurance was not broad enough to cover the entire scope of their digital risk. Case in point—in a few recent high-profile cybercrime cases, the victimized companies believed they had cyber insurance, but instead had less-robust “cyber as a peril” bolt-ons to traditional property insurance policies, which had very small sublimits of coverage insufficient to cover the scope of their damages.

Here are three main reasons why organizations underestimate—and underinsure—their cyber risk, and why they should reevaluate their position moving forward: END_OF_DOCUMENT_TOKEN_TO_BE_REPLACED 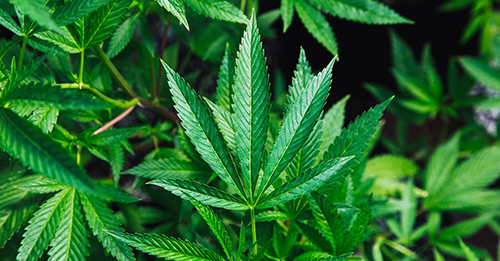 Illinois became the 11th state to legalize the private use of marijuana when Governor JB Pritzker signed the controversial bill into law yesterday, June 25th.  Starting January 1, 2020, any Illinois resident age 21 and older may buy and possess up to 30 grams of marijuana, or the equivalent amounts of edibles with up to 500 mg. of THC, the psychoactive ingredient in marijuana.

The impact on Illinois employers is hazy . . .

Illinois’ “Cannabis Act” provides some of the most extensive workplace protections for employers compared with other similar acts in other states.  The law specifically states that “employee workplace safety shall not be diminished and employer workplace policies shall be interpreted broadly to protect employee safety.”

Because marijuana is still illegal under federal law, Illinois employers may still maintain drug-free workplace policies. Similar to alcohol use, an employer may rely on discipline or terminate an employee who is under the influence or using marijuana in the workplace or while on-duty, depending upon your stated Human Resources policies.

For a detailed analysis of the Cannabis Act, and some thought provoking questions to help your company prepare for next January’s effective date, see “Employer Insights:  Recreational Marijuana in Illinois”

Please contact Leslie Morse with questions about your HR compliance as it relates to this new legislation,
LMorse@AlperServices.com or 312-654-4251.

Click here to view the benefits news stories for June that we think are significant to you. For questions about anything you read, contact our Employee Benefits Team at EBTeam@AlperServices.com. 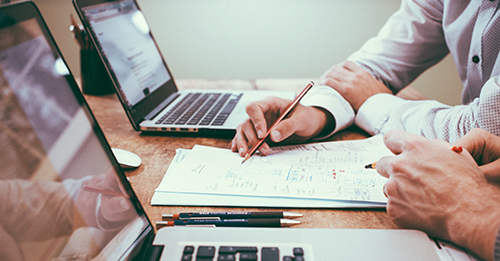 Forty percent of all workers’ compensation and general liability premiums contain errors, often in favor of the insurance carrier. These errors occur because your premiums are calculated according to complex rules which are beyond the expertise of most insurance company and agency personnel. The good news is that you DO NOT have to accept these errors!

You and your organization may realize immediate and long-term financial benefits by allowing our experienced AuditRate experts to ‎analyze how much your paid in premiums over the years. Our expertise will not only identify any premium overcharges, but more importantly secure a refund for you and typically stop the perpetuation of the future errors, saving you even more money.

Simply stated, if we secure no recovery for you, we charge nothing. We are paid a percentage of your recoveries only if and when you receive the overpayments back from the insurance carrier. The following is an example from the past 12 months.

An international designer and installer of logistics and distribution systems has a significant U.S. presence in several states. As the client of various insurance brokers, their insurers had misclassified their employees’ work and their overall operations. Over-estimating their hazards resulted in years of‎ premium overcharges. AuditRate’s experts quickly identified the errors, affirmed the findings with each respective‎ state’s Insurance Rating Bureau, and then worked with the A+ rated insurer on correcting the mistakes from the past, as well as fixing the Client’s current (and future) policies. The result?
The Client:

‎How does AuditRate succeed for our Clients? AuditRate has recovered tens of millions for our Clients over the past 35 years. Let us conduct a no-risk AuditRate assessment to demonstrate how our unique capabilities will directly benefit you. Contact your Alper Account Executive or John Przybylski at JPrzybylski@AlperServices.com to start the process. 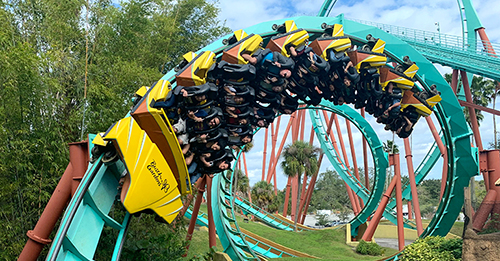 Why are the fingerprints of a 14-year old boy taken at Six Flags Great America causing Illinois employers to immediately review their privacy policies or risk facing civil lawsuits?

In January, the Illinois Supreme Court ruled that the amusement park violated the state’s Biometric Information Privacy Act (BIPA) when it failed to obtain a written release from the boy or his parents, and did not inform them about the purpose and length of retention of the fingerprint data. Rosenbach v. Six Flags Entertainment Corporation et.al., 2019 IL 123186 (Ill. Jan. 25, 2019) Notably, the boy had not suffered any actual monetary damages.

Biometric technology is gaining popularity as a way to verify employee identity, whether for timekeeping, building access, etc. However, with the heightened convenience to the employer comes an increased concern by employees about violations of their privacy rights. A violation under BIPA entitles a plaintiff to at least $1000 in damages each time biometric data is collected or stored without notice and consent. END_OF_DOCUMENT_TOKEN_TO_BE_REPLACED

Click here to view the benefits news stories for May that we think are significant to you. For questions about anything you read, contact our Employee Benefits Team at EBTeam@AlperServices.com. 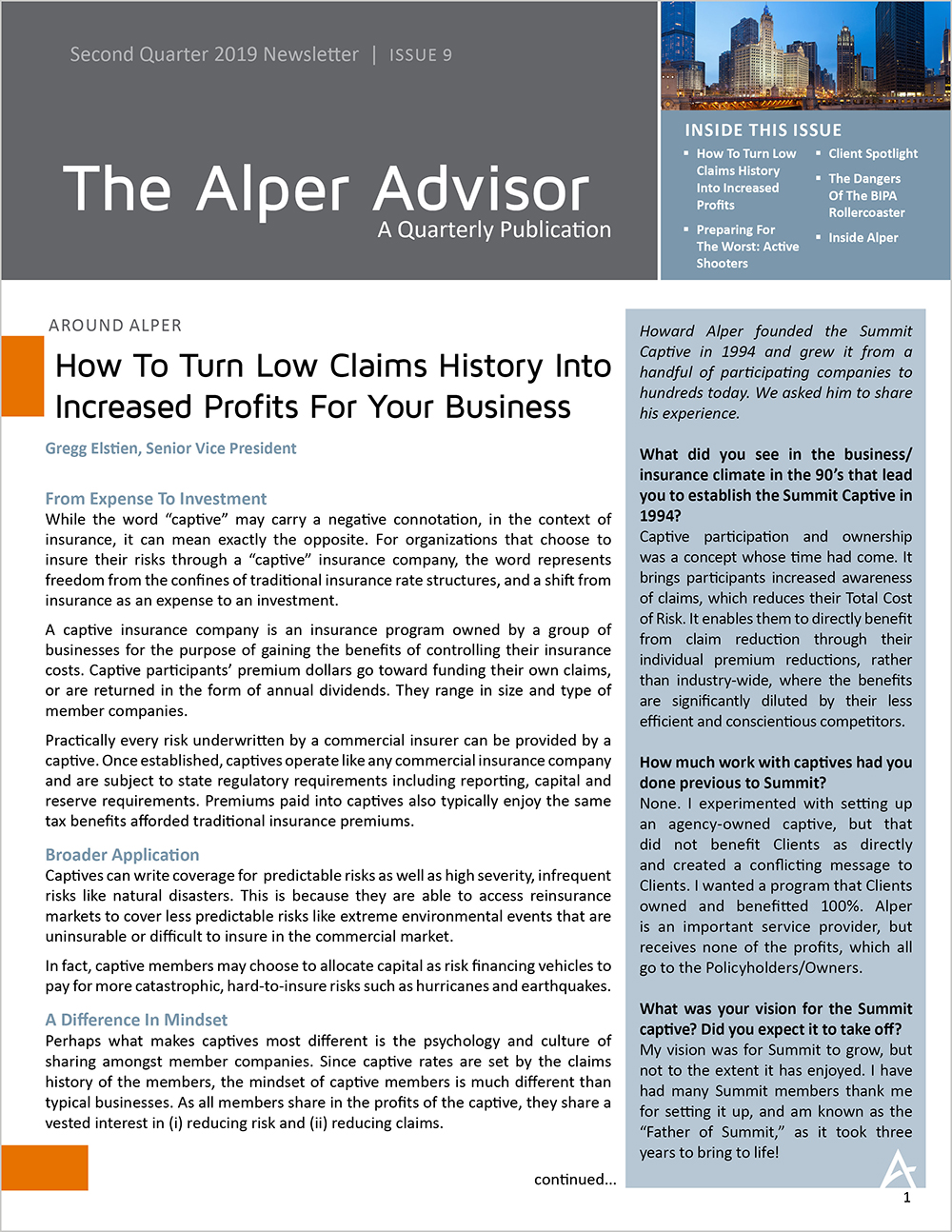 The second quarter edition of The Alper Advisor is live with a cover story on the benefits of captive insurance programs, our latest Client Spotlight, how to prep for an active shooter scenario and how to comply with the Biometric Information Privacy Act at your company. Click on the Advisor to read more. 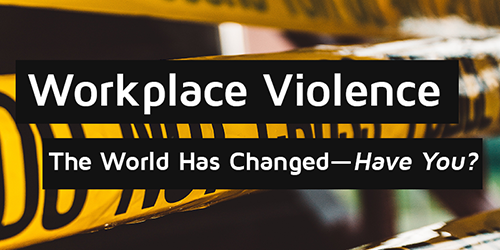 Alper invites you to a seminar featuring experts who will discuss how to manage workplace violence including active shooters. Join us  Tuesday, April 30th from 9:00am to 11:30am.
Topics cover:

Our expert speakers include: